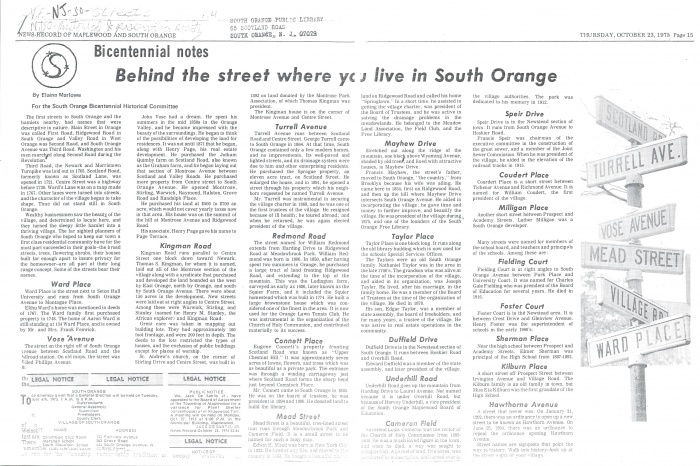 Third Road, the Newark and Morristown Turnpike was laid out in 1705. Scotland Road, formerly known as Scotland Lane, was opened in 1721. Centre Street was a highway before 1730. Ward's Lane was on a map made in 1767. Other lanes were turned into streets, and the character of the village began to take shape. Time did not stand still in South Orange. Wealthy businessmen saw the beauty oft eh village, and determined to locate here, and they turned the sleepy little hamlet into a thriving village. The far sighted planners of South Orange who hoped to keep our town a first class residential community have for the most part succeeded in their goals--the broad streets, trees, flowering shrubs, their houses built far enough apart to insure privacy for the homeowner -- are all part of their long range concept. Some of the streets bear their names.

Ward Place is the street next to Seton Hall University. It runs from South Orange Avenue to Montague Place.

Elihu Ward's home was mentioned in deed of 1767. The Ward family first purchased property in 1748. The home of Aaron Ward is still standing at 154 Ward Place, and is owned by Mr. and Mrs. Frank Fenwick.

The street on the right off of South Orange Avenue between Scotland Road and the railroad station. On old maps, the street was called Phillips Avenue.

John Vose had a dream. He spent his summers in the mid 1850's int eh Orange Valley, and he became impressed with the beauty of the surroundings. He began to think of the possibilities of developing the land for residences. it was not until 1871 that he began, along with Henry Page, his real estate development. He purchased the Jotham Quimby farm on Scotland Road, also known as the Graham farm, and he began laying out that section of Montrose Avenue between Scotland and Valley Roads. He purchased more property from Center Street to South Orange Ave. He opened Montrose, Stirling, Warkwick, Raymond Ralston, Grove Road, and Randolph Place.

He purchased his land at $500 to $700 an acre, which would not cover yearly taxes now in that area. His house was on the summit of the hill at Montrose Avenue and Ridgewood Road.

His associate, Henry Page gave his name to Page Terrace.

Kingman Road runs parallel to Center Street one block down toward Newark. Thomas S. Kingman, for whom it is named, laid out all of the Montrose section of the village along with a syndicate that purchased and developed the land bounded on the west by East Orange, north by Orange, and south by South Orange Avenue.

Great care as taken in mapping out building lots. They had approximately 10 foot frontage, and were 200 feet in depth. The deeds to the lots restricted the types of houses, and the exclusion of public buildings except for places for worship.

St. Andrew's church, on the corner of Stirling Drive and Center Street, was built in 1892 on land donated by the Montrose Park Assocation, of which Thomas Kingman was president.

Turrell Avenue runs between Scotland Road and Center Street. George Turrell came to South Orange in 1864. At that time, South Orange contained only a few modern homes, and no improvements. Its well-paved and lighted streets, and its drainage system were due to him and other enterprising residents. He purchased the Sprague property, an eleven acre tract, on Scotland Street. He enlarged the house, and in 1891, he opened a street through his property which his neighbors requested by named Turrell Avenue.</p>

Mr. Turrell was instrumental in securing the village charter in 1869, and he was one of the first trustees of the village. He resigned because of ill health; he toured abroad; and when he returned, he was again elected president of the village.

The street named for William Redmond extends from Harding Drive to Ridgewood Road at Meadowbrook Park. William Redmond was born in 1806. In 1850, after having spent two summers in Orange, he purchased a large tract of land fronting Ridgewood Road, and extending to the top of the mountain. This was the Ludington farm, surveyed as early as 1686, later known as the Squier Farm, and it included the Squier homestead which was built in 1774. He built a large brownstone house which was considered one of the finest int eh area. It is now used for the Orange Lawn Tennis Club. He was instrumental in the organization of the Church of Holy Communion, and contributed materially to its success.

Eugene Connett's property fronting Scotland Road was known as "Upper Chestnut Hill." It was approximately seven acres of lawns, flowers, and trees which was as beautiful as a private park. The entrance was through a winding carriageway just where Scotland Road forms the sharp bend just beyond Comstock Place.

Mead Street is a beautiful, tree lined street that runs through Meadowbrook Park and Cameron Field. It is a small street to be named for such a busy man.

Edwin H. Mead was born in New York City in 1822. He tired of city life, and moved to the country in 1868. He bought a beautiful plot of land on Ridgewood Road. His home was called "Springlawn." In a short time, he assisted in getting the village charter, was president of the Board of Trustees, and he was active in solving the drainage problems in the meadowlands. He belonged to the Mead Land Association, the Field Club, and the Free Library.

Stretched out along the ridge of the mountain, one block above Wyoming Avenue, shaded by old trees, and lined with attractive houses, is Mayhew Drive.

Francis Mayhew, the street's father, moved to South Orange, "the country" from Brooklyn because his wife was ailing. He came here in 1854, first on Ridgewood Road, and then up the hill where Mayhew Drive intersects South Orange Avenue. He aided in incorporating the village; he gave time and money to further improve, and beautify the village. He was president of the village during 1875, and one of the founders of the South Orange Free Public Library.

Taylor Place is one block long. It runs along the old library building which is now used for the schools Special Services Offices.

The Taylors were an old South Orange family. Nathaniel Taylor was in the area in the late 1700's. The grandson who was alive at the time of the incorporation of the village, and aided in its organization, was Joseph Taylor. He lived, after his marriage, in the family home. He was a member of the Board of Trustees at the time of this organization of the village. He died in 1878.

His son, Edgar Taylor, was a member of state assembly, the board of freeholders, and for many years, a trustee of the village. He was active in real estate operations in the community.

Duffield Drive is in the Newstead section of South Orange. It runs between Hoskier Road and Overhill Road.

Edward Duffield was a member of the state assembly, and later president of the village.

Underhill Road goes up the mountain from Harding Drive to Laurel Avenue.

Not named because it is under Overhill, but because of Harvey Underhill, a vice president of the South Orange Maplewood Board of Education

Reverend Louis Cameron was the rector of the Church of Holy Communion from 1895-1909. He was a much loved figure in the town, and when he died, a way was sought to eulogize him. A parcel of land, five acres, was purchased by subscription, and turned over tot he village authorities. The park was dedicated to his memory in 1912.

Speir Drive is in the Newstead section of town. It runs from South Orange Avenue to Hoskier Road.

Francis Speir was chairman of the executive committee in the construction of the great sewer, and a member of the Joint Sewer Commission. When he was president of the village, he aided in the elevation of the railroad tracks in 1915.

Coudert Place is a short street between Tichenor Avenue and Richmond Avenue. It is named for William Coudert, the first president of the village.

Another short street between Prospect and Academy Streets. Luther Milligan was a South Orange developer.

Many streets were named for members of the School Board, and teachers and principals of the schools. Among these are:

Fielding Court is at right angles to South Orange Avenue between Park Place and University Court. It was named for Charles Gale Fielding who was president of the Board of Education for several years. He died in 1916.

Foster Court is in the Newstead area. It is between Crest Drive and Glenview Avenue. Henry Foster was the superintendent of schools in the early 1900's.

Near the high school between Prospect and Academy Streets. Elmer Sherman was principal of the High School from 1887-1893.

A short street of Prospect Street between Irvington Avenue and Village Road. The Kilburn family is an old family in town, but Miss Eta Kilburn was the first graduate of the High School.

Street names are signposts that point the way to history. Walk into history -- look up at the street signs of your village.